Monday we were off and going south at a slow pace. 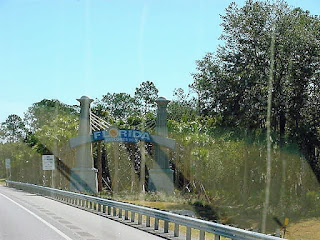 Within a short time we were crossing the line and into Florida.
The first stop was at a new Pilot Flying J to fill up the tank on the motorhome. Then it was on down the road. 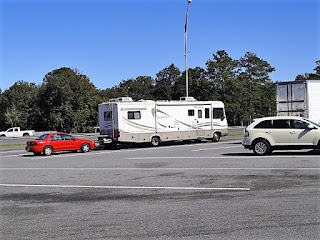 It was around 2:30 pm so we stopped at a rest area to have a sandwich and a soda, I also had a small bowl of ice cream.  Then I was outside cleaning the windshield that had bugs splattered on it. 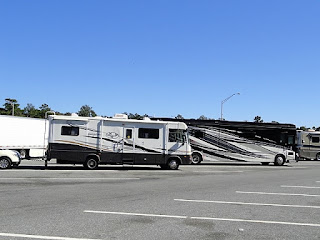 By the looks of the amount of motorhome and trailers on the road going south there are going to be more people spending the winter in Florida.

We had two days to get to our park because we wanted to arrived at the first of the month to check in.
So the first night we stayed at a Walmart on Ocala the same place we stayed last year because it was behind a Bob Evans Restaurant and like last year we had the carry out breakfast meal for four at $19.99. We had enough for the next morning also with still a little left over.

Tuesday was a good traveling day with a stop at a Flying J for propane but they were working on the tank and meter so I couldn't get the tank filled.
I parked at the Walmart to stay the night like we did last year, then went into ask permission to stay the night and was No Overnight Parking Allowed that they had their policy about overnight parking.
Nancy said what will we do now and I said we will just go to the park and check in early, so here we are for the winter in Winter Paradise Resort, Florida for the winter.

Sorry for not saying hello sooner. Glad you are safe for the winter.
We left Canada around noon on Wednesday and are stopped for three days in Amarillo Texas.
One of these days we'll get together.
Be Safe and Enjoy!