After Nancy went in to the Doctor yesterday early because he wanted to ask her about the iron infusion reaction she had to it.  He decided that she should not have the full dose again.  So now she will be doing a smaller dose on Monday.

First since we were close to Sams Club I filled up the car with fuel at the lowest price in town.  Then it was inside to get a couple of items we needed.

By that time Nancy was getting hungry so it was a stop at the Cracker Barrel where we had breakfast for our meal.

Then I asked Nancy if she felt like going to the Green Key Park, I thought she might say yes, which she did. 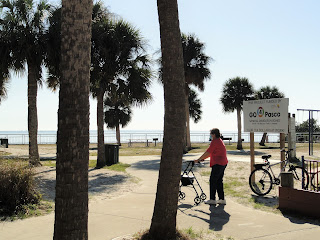 She had her walker today so it was much better for her than the cane.  It was such a nice day with the temperature in the middle 80's. 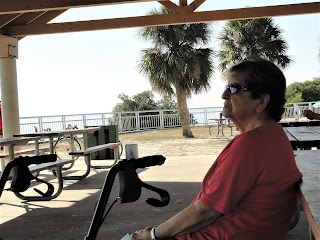 We sat down in the picnic area in the shade where we enjoyed the view of the gulf while a cool breeze came in off the water made pleasant. 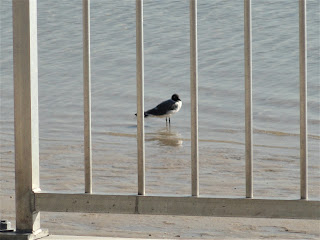 We were not the only ones enjoying the weather and the gulf, here is a sea gull looks to be doing it also. 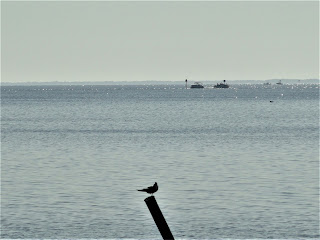 These boaters were out for the day as was the bird. 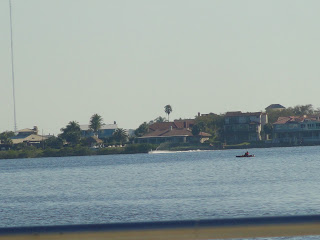 These two boaters just riding around.

It was truly a very nice relaxing day.

Well the weather is still on a roller coaster chart.  After a few days of sunshine, Friday it was an all day of cool rain.  That was the day Nancy was getting the iron infusion that lasted for three hours

Both of us were worn out in the I sat in the car for the whole time.

So today its back to a sunny day the temperature being in the middle 70's.

Today will also be another day Nancy will have her blood drawn at Lab-Corp so the kidney doctor can check to see if there is some improvement over the last month. 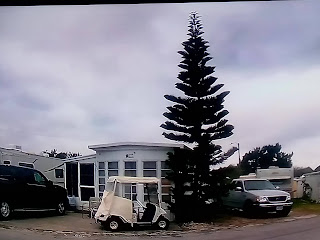 After about a week of 80* weather we are only getting up to 67* with a chance of rain today.  I'm not complaining I'm just saying.  I know most of you are having much of the cold snowy temps that has hit the USA.

I'm staying inside as much as possible, only traveling outside for some groceries and things that need attending to.  The only time Nancy is out of the rig is for Doctor appointments.

She has an appointment today with the family doctor and then Friday is going in for another iron infusion.

She has been feeling weak so last Friday they checked her blood and her blood count was real low so that is the reason for the infusion again.  I think the last time she had to do it three times in order to bring the count up.

It has warmed up enough now that I have been wearing my short pants for the last few days. I hope it will last so the legs will get some tan, then the skinny old legs will not look like a chicken running around.

Nancy saw a soul food dish with cabbage and smoked sausage that she thought would taste good. So thats what we had on Thursday and it really was good and we hady some left over for Friday. On Friday though she added cooked spaghetti pasta, a little Soy Sauce to it to make it a Lo Mein dish and it tasted a little better.

It was a good weekend for me because I had enough College Basketball on Saturday and the Super Bowl yesterday to keep me entertained to the limit. The weather is going to be warm most of this week with a chance of rain each day.

Thanks for stopping by and I wish you a great day.


This week has been cold for us with the last two days in the low 50's.

It was time for the clothes to be washed and dried so down to the laundry room for that yesterday.  There was no one doing their clothes today, I guess it was to cold for them. 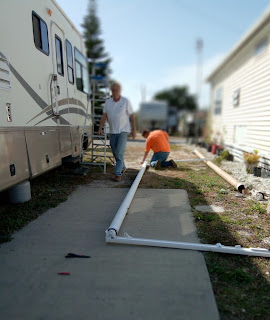 I finally found a mobile tech to come out to install us a new patio awning.

I had to get all new hardware because the wind that took it down last spring twisted it all up. 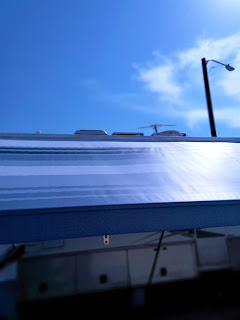 Here it is looking good, the father (Rick) and son (Gary) did a nice quick installation of it. 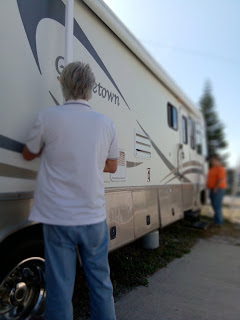 Here it is rolled back up even from side to side nice and smooth. 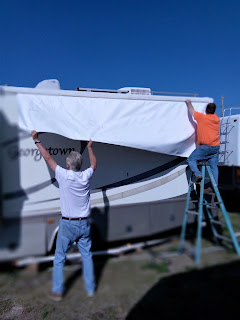 Rick gave me such a good price I had him to install new slide covers.  Here they are with the large living room cover sliding from the rear of the motorhome up to the slideout. 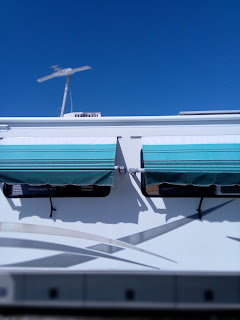 Installed and now on to the bedroom slide. 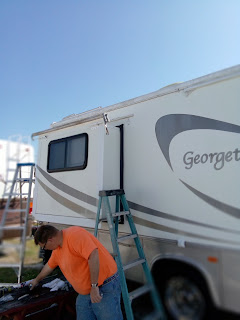 The bedroom slide was a small cover so it didn't take very long.

I'm so glad that I have found Rick's place to have this work finished on our motorhome and paying a reasonable price. Much less than the dealerships in the area.