We had a nice day

We were up early yesterday morning because this was the day to have the four new tires put on the rear of the motor home. 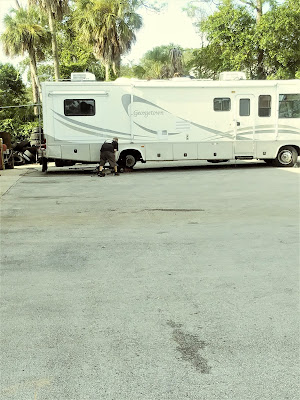 I was there for only 10 minutes before they started working on taking the old tires off. 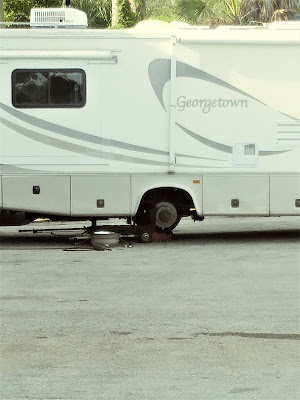 Then with the old off. 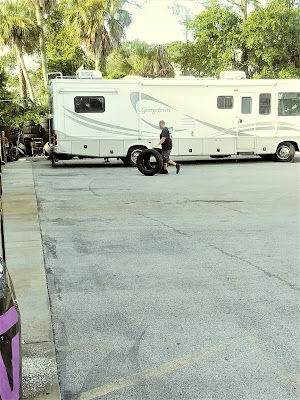 The new tires come rolling in two at a time, they had the tires install and we were rolling out in a short one and a half and hour later. 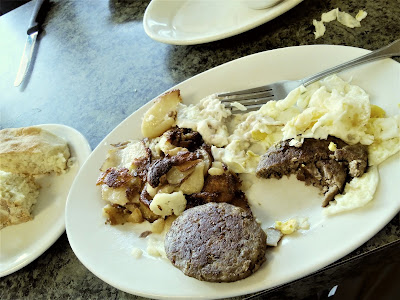 Since Nancy and I were both filling the hunger pains we stopped a a restaurant and had a nice breakfast.
She had a couple of with bacon, grits, gravy and a couple cups of coffee.
I had the two eggs, sausage, home fries, couple cups of coffee and the gravy we both shared.
We took our time and enjoyed our meal eating out for the first time in months.

After getting back with our home that it was such a nice day to spend it inside.
So I asked Nancy if she would like to go for a ride, she said she did and off we went. 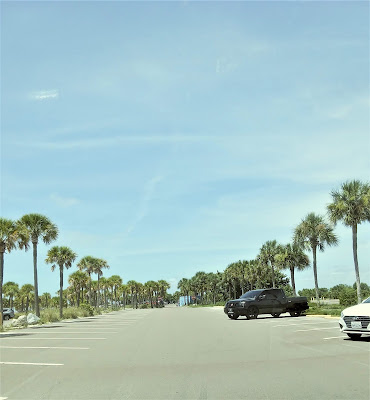 I drove down to Tarpon Springs which is where the Howard Park is located that we used to go a few years back. 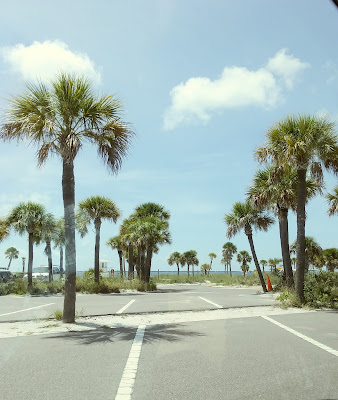 We just rode through the park, not getting out of the car. 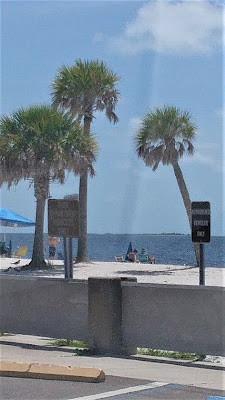 Enjoying the palm trees and the gulf water. 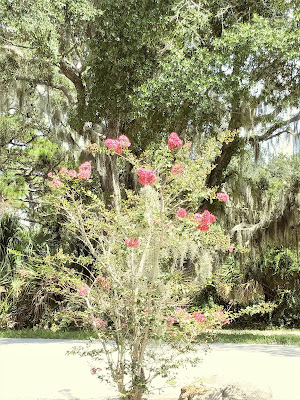 On the way back home I asked Nancy if she would like an Slushy drink, she did.
It was the first time we have had one in a number of years, it was good and cold.

This was the first leisurely day that we have had in a while.

Florida is getting ready for the Hurricane that is to hit between now and tomorrow.
Of course here on the west coast we should be ok with maybe some rain and I don't think very much wind. 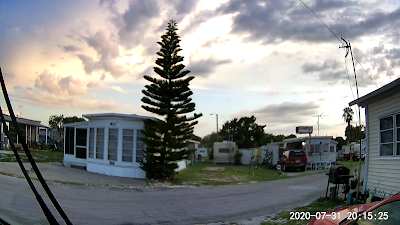 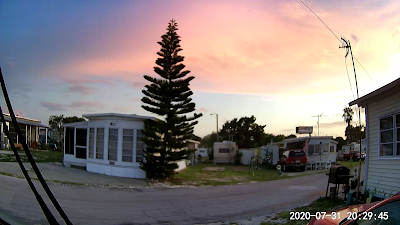 There were clouds moving in, not rain clouds, but nice white clouds. 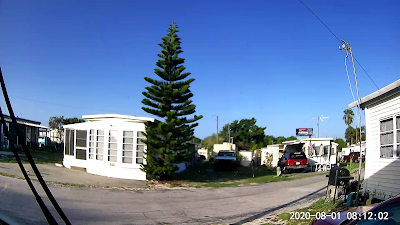 Then this morning clear blue skies.

Tomorrow evening I will slowly be getting ready to move the motor home out.
But not to hit the road but to take the motor home down to the tire shop to get the four new tires put on the rear.
They didn't have the brand I wanted but they did give me a discount on a better tire which is the Iron Man tire.
This is a good brand that I had put on the front a few years back and have had good results with.
So now all six will be the same.

Now for the short range plans that can change if need be.

Our daughter Sherry is coming down from West Virginia a week from Monday and we will be picking her up at the St Petersburg Airport at 5:30 pm.
Then Tuesday, the next day will be leaving out to finally head north for our summer vacation.
This will be the three and a half months longer staying here then anytime before.  With doing so it looks like we will have to cut our times shorter visiting all of the family.
But whatever time with them we will cherish each moment.

Things are about the same thing around the old home place.
At least we don't have to wear our mask when we stay at home.  It is required when entering in stores which I have been doing even before Florida put it in as a rule and it seems everyone is doing so now a days.

A few days ago I was going to take couple of sirloin steaks out of the freezer and put them on the grill. but I didn't get a chance to because it has been a rain storm each evening for over a week.
I did do up the steaks though, but they do not taste the same in the small table top oven that we have.
Sorry no photos because I was in such a hurry to eat them I forgot to take the photo. 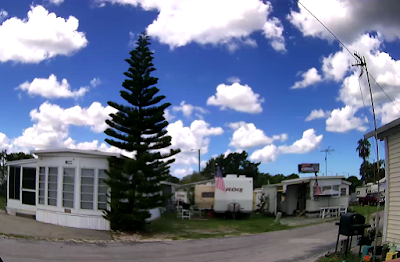 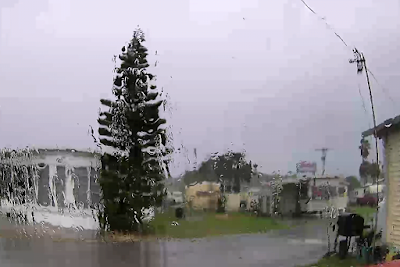 And end up like this.
Yesterday I took a couple of loads down to the laundry room to do them up which I had finished up before 11:00 am.
Could not believe it but it didn't rain in the afternoon.  So I took a couple of ribeye steaks out of the freezer and grill them to perfection. 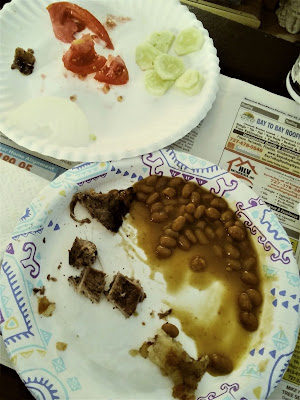 To prove it here is a photo (once again tasted so good I almost forgot the photo).
What's left of the steak with fried potatoes, good Bush's BBQ Beans with onion, tomato and cucumber.  Yeah really good tasting.

Today we will get into a little house cleaning.

A little this and a little that

The weather here has been the same for a couple of weeks now and we are not use to it since we have always have gone north at this time.
The night time temperatures have been close to the 80's and day time at or near 93 with a thunder storm in the afternoon.
But yesterday's evening storm was something else!  I mean it poured the rain with the thunder and lightning It sounded and looked like we were in a battle zone.
After that let up later as the evening settled in with a ray of sun shine, everything looked better. 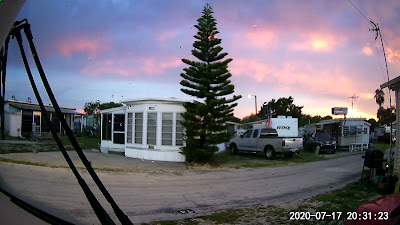 So this is the look we had before the dusk of the day came in.

The week has been as normal as it could be with me doing a load of laundry one day and then the next day of taken up the throw rugs and shaking them out, sweeping the floor and running the Swiffer wet pad over the floor.
It sure has been easy to keep the floor clean since I installed the vinyl plank floor down, much more clean then the carpet was.  also easier to do.

Not going to the store as much and when I do the mask is on the face.
Nancy is going to have to learn how to shop again when she does go shopping. she has not shopped  since back in March.

Things I will not repeat

Well as you can see, everything is about the same.
I could tell you the I've been out to the store a couple of times but I will not bother you with that.

Or I could give you a report on the weather each day, but I know it would be boring to read about the record or records of the high temperatures we are having with a chance of thunderstorms every day. 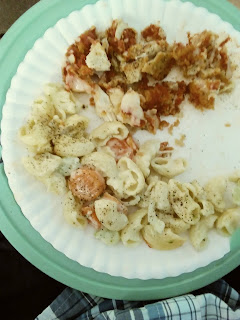 Or maybe tell you about what we had to eat for breakfast, lunch and dinner like this  Chicken Parmigiana with a delicious pasta that we had for supper one day last week.
No I would not bother you with that!
OK, now seriously we still do not if or when we will be leaving here to make our trip north, it is still a wait and see situation.
I'm waiting until I know we will be going somewhere be before I buy the 4 new tires for the rear of the motor home.  Also I have not heard anything on my new glasses being in where I had them made.
Thanks for stopping by and have a great day.
Posted by Nancy and Joe at 3:09:00 PM 4 comments:

First thing I wanted to wish all of my readers a very Happy and safe 4th of July.
If you are traveling in your car please do be careful out there.  May you have the best ever day with your family and friends.

Nancy did get out for the first time since March.  Her hair had grown out so much that she just had to have it cut and also she had a head full of gray hair so she has it colored also.

Well it looks like we will be here longer than we expected to be.  After the latest report of the CODVID-19 we decided it best to stay put until things got a little better.
And the talk about a 14 day stay in the states that we would be in as we travel.
Also some of the campgrounds that we usually stay in are closed down and will not be opening anytime soon, if at all this year.

The only time I'm out and about is when we are in need of food and other things.

Gas has gone up ten cents a gallon in the last few days as it always has this time of year when people are traveling.

Thanks for atopping by and have a great day.
Posted by Nancy and Joe at 9:05:00 AM 2 comments:

The big news is I'm finally finished with getting my eyes checked.  The doc said everything looks ok I can go ahead and have new glasses made.
I ask him if there was much of a change since the last time I've had glasses made, he said immensely.
So when they gave me the results to get my glasses made it shows I now have 20/30 vision in both eyes.  Of course I still have the  astigmatism in the left eye.
I went ahead and had them order me new glasses, so it will be 10 t0 15 days until the new glasses come in so we will be here for that long or maybe a little longer.

That still depends on what is happening on the virus thing going on with the lock-downs.

We have mandatory face mask on when out in public.  I went to Walmart the other day and everyone that was inside were wearing their masks.
Our banks are only open with the drive through, unless you get an appointment to go inside.
Posted by Nancy and Joe at 9:52:00 AM 1 comment: