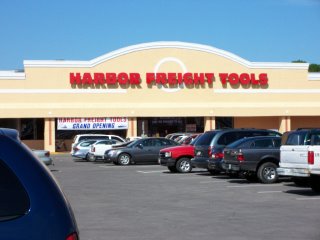 Today started out yet different. I've been waiting for a month for the 20th of march to roll around. No it wasn't because this is the first day of spring. Its because the new Harbor Freight Store opened today. They were giving away a set of screw drivers to the first 1000 customers. I didn't care for this part as I have all kinds of screw drivers so I wasn't there at 8:00am when the doors opened. I was there about 2 1/2 hours later. Anyway they said the screw drivers were gone at 9:30am and I wasn't surprised. That was one crowded store. They had a few come on in deals,but not that many. They do have a lot of tools and other stuff. I got a few things that I thought I needed but probably could have done without.
After I got back we went out so Nancy could get her hair cut,from there we went up to the mall to do some walking and then to WalMart to pick up our medicine.
Another one of those days that goes by so fast.
Posted by Nancy and Joe at 8:40:00 PM