We pulled out of the Mayberry RV Park Friday on our way headed north.
Things looked good for the day, it was cloudy but at least it wasn't raining. 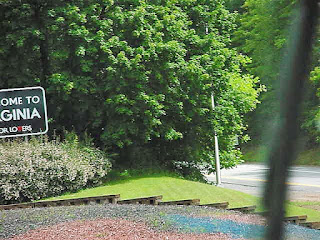 At times you get the photo you want and at other times you just miss it.

Soon we were leaving North Carolina and crossing into Virginia going up a mountain, I mean a very large mountain. 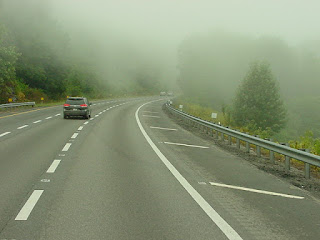 It was getting foggy but not really that bad as I thought as we were nearing the top.
Remember I said this was a very large mountain. 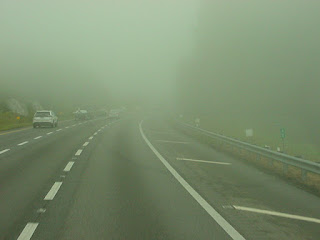 The farther we went up the mountain the thicker the fog was getting and the slower the traffic was going. 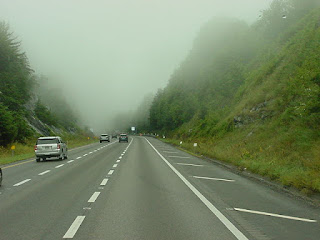 Once on top the fog was clearing and going down the other side there was no fog so all was good.

When we got to Wytheville I stopped to fill up the motor home at the Flying J on I-81 because I knew the fuel would cost more in West Virginia.
The cost at the Flying J was $1.96 with my Flying J Advantage Card.  That was 20 cents more than I paid the last fill up.

We didn't know if we could get a site at the Stony Fork Campground since it was Friday and knew the week end campers may have all the sites filled.
But as we went around the loop there was a couple of empty sites that was large enough for the motor home.
It rained most of Friday night but Saturday was a nice and sunny day.
I got a couple of things accomplished including a couple more coats of varnish on the new slide out boards. That makes four coats and I will put more on it when I get the time, we want a deep shine on it.

You have definitely been keeping yourselves busy with travel, visiting family and friends. Love the views when traveling through the mountains just not the strain on the drive train.
Just getting caught up.
Be Safe and Enjoy!