Yesterday I had to make a run to Milledgeville to pick up a few things.
I needed some cabinet screws so the first stop was to Tractor Supply because they have a good selection of bolts and screws but this time not the type of screws I needed.
Next stop was Lowes to see if they had them.  They didn't have the same kind but a stock of a new brand that used a torque type instead of a square to screw them in.  I thought I would have to buy a torque driver but on looking at the pack of screws it had a torque driver in it .

Next stop was to Aldi's to see what they had at a good price. After looking through the store I decided I would walk next door to Walgreen's Pharmacy to see if they had my prescription of Vytorin ready for pick up.  Yeah they had it but said it would cost full price because my insurance would not pay for it.
With out going through a lot of detail I called the insurance and on the phone for an hour they approve it and it didn't cost me anything.
In short it seems as though they now have a generic brand and the insurance will not pay for the name brand. 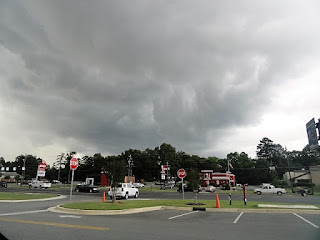 This is what I saw rolling in as I was on the phone. 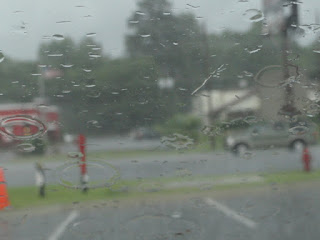 Then the rain came so heavy that it made it hard to hear while on the phone.
Then it was back to Aldi's for the groceries where I bought a bag of 12 .oz  salad for the price of .89 and then I saw the price of the eggs I just had to buy a two dozen and who could pass up a bargain price of .25 a dozen for eggs.  That's not a type error they where twenty-five cents a dozen can you believe it. I also bought a few other thing.

Next stop was the Dollar General to get a couple of items.

From there it was Kroger for the final stop for a few more things.

I did get back home after a long day out to a good pork chop supper that Nancy had waiting for me. 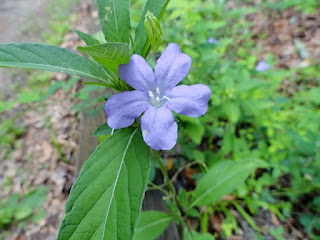 With all the hard rain we are having the flowers are sprouting out. 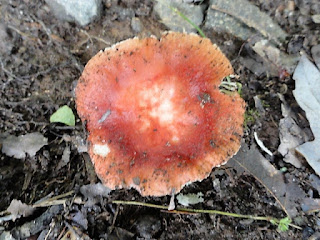 Not only flowers also the toad stools are popping up through the dead leaves. 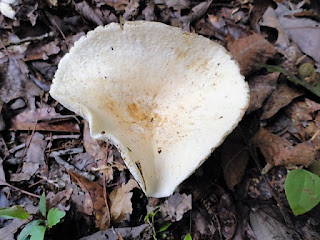 This one holding some water and a little of the water coming out the formed spout.

Looks like you had a very busy day.
Be Safe and Enjoy!