Have to go hunting

Tuesday after doing some small things around the motorhome I felt like taking a short walk so I went up around the loop that was closed.

Here is a pano of the road around the pavilion.
This part is either up or down the mountain with campsites on each way you go but at the very top looks like it is for group camping. I think they still let scouts use it when they come here because it looks like it they still take very good care of the grounds. 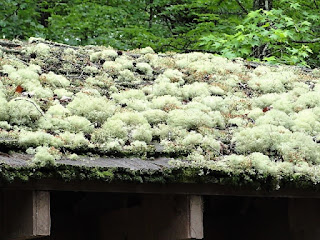 Way too much moss on the roof. 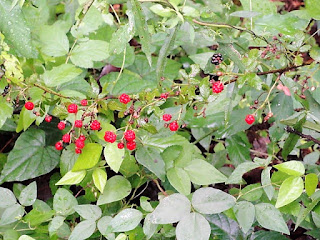 Looks like the blackberries are out and soon it will be picking time. Oh they taste so good to eat when fresh picked off the vine.

I woke up yesterday morning with the notion that it was time to leave so I asked Nancy about it she said it was ok with her.
First I needed to change the oil in the car so out I went after breakfast to do the chore.
Mean while Nancy was getting ready doing her things in the motor home.
After both of us had are usual getting road ready we were pulling out and one stop before we left Lake Sinclair Campground was to dump the tanks.

Then we were headed north the COE Petersburg Campground  which was a 95 mile distance.
We arrived around 4:00 at Petersburg Campground and stopped to check in.  We like to stay here for at least a week but I had forgotten it was Father's Day weekend and the host aid they were filled up.
I asked if he had anything for a couple of days he did have a few open for two days so I took them and we will go from there. 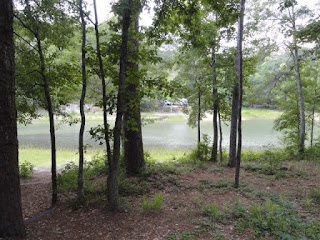 This campsite is on an inlet with campsite all around it, here is a photo of a campsite on the other side. 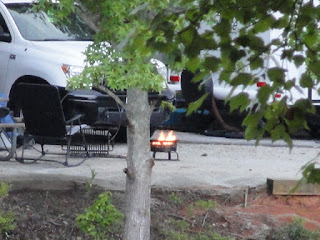 And as I zoomed in with my little Sony Cyber-Shot Camera I bought off Craigslist I could see they had a nice camp fire going.

Nancy and I will scout around a little bit today to see if we can find a campground with a site for several days. That is where the have to go hunting comes in.