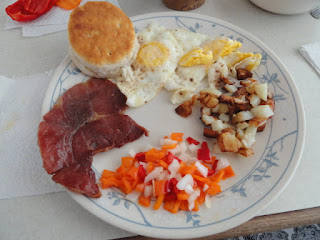 Yesterday started out real good for me with Nancy fixing me my Saturday big breakfast.
This was a long time coming in that I was busy and didn't want her to have a big breakfast but as things are winding down for us to get on the road for the summer I wanted to have the "Saturday Big Breakfast".
This breakfast consisted of two eggs that will be mixed with the peppers and onions I have cut up. I diced up a potato for hash browns, a slice of country ham, biscuit and a good cup of coffee.

After breakfast and getting ready I was outside to straighten up the front right bay so I could have a place put the two five quart jugs of  oil that I bought for the motorhome and car. Then I had to make room in another bay for the few things I took out of the front by.
Its a never ending battle rearranging the outside bays.

Nancy reminded me that I forgot to buy some paper plates when I was at Walmart the other day so I told her I needed to go and get some windshield washer hose for the car. While I was outside earlier I remembered that the washer was not squirting water on the windshield so I looked at that to find the hose was worn into in a section of it.
So off I went to Walmart first to get the paper plates that we use while on the road to save the water we have in the fresh water tank. 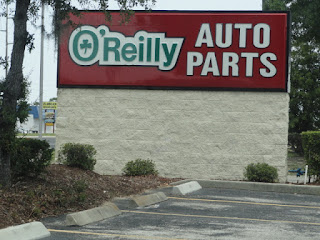 Then it was to O'Reilly Auto Parts for the windshield washer hose and a splice kit.
After getting home I repair the hose with the splice kit and new section of hose so that was another thing good for the day.
Nancy made some of her good homemade chili enough to put in the freezer so I could have hot dogs when I felt the urge.
We had hot dogs for supper with the fresh made chili and they were so good.
I'm sorry but I was in such a hurry to eat the hot dog I forgot to take a picture.
The evening was some computer time and then watching tv for Nancy in the bedroom and watching a basketball game for me on the tv up front.
We were enjoying our different programs when it started lightning and thundering then the hard rain came with the power going out several times.  The stormed past after about half an hour but continued to rain and the temperature dropped from 81* to 71* and this was at 10:00 pm.
But by the time we were ready for bed the rain stopped completely so we were able to sleep with the window open above our head.
Thanks for stopping by and have a great day.

Keeping organized is a never ending battle no matter what kind of RV you have. You also kept busy making certain you'll be ready for your travels.
Hopefully your EMS protected your electronics during that storm.
Be Safe and Enjoy!