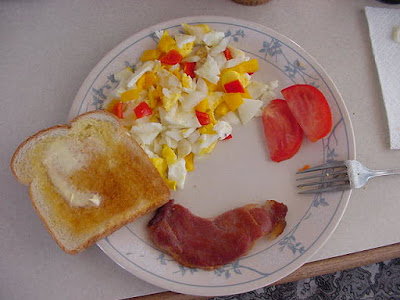 Saturday morning started with a good breakfast of eggs with onions, pepper with a couple of quarter sliced tomatoes and a piece of country ham with that toast and coffee.
With a good breakfast like that I was ready for my day and to start on my new project.  On the face of the slice there was the last remains of the old upholstery material that I took off.
I also put up most of the new white pine boards which Nancy and I decide the we wanted as a new look to dress up in that area of the motorhome.
We both agree that it looks much better and gives more light to that area.
I will have the before and after photos when I'm finished with it.  It might be a while as I want to stain and varnish the boards.

Yesterday I went to Lowes to get a few items that I needed for the new project.
From there it was to Walmart to get some small packs of screws and nails because Lowes had the large ones which was more than I wanted.

Then it was a stop in Aldi for a couple dozen large eggs at an unbelievable price of .56, two packages of 12 oz. salad mix for .89.

Then I stopped at Bob Evans for the dinner I ordered earlier.  We had a pot roast with gravy, dressing and rolls.  It was the Family Feast a meal for four at a price of $19.95 so it will be two meals for us, which is a bargain indeed.

Taking your time to do any project is a way to avoid mistakes and the final product is always better. Waiting to see the pictures.
Be Safe and Enjoy!