We had a full day yesterday. After our slow getting up having breakfast and doing our computer things it was time to get ready for the day.  The first thing was to go to the Laundromat to get the clothes washed. 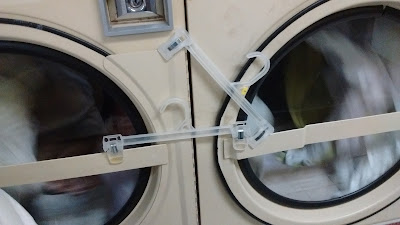 Washing the clothes was not a problem it was when we loaded one of the dryers putting the money in and starting the dryer. The door would come open so with a little thinking I used a couple of the hangers to hold the door closed.  Folks there always a cure for the problem all you have to do is find the cure.  Sometimes its easy and sometimes its hard.
After doing the laundry it was a stop at the Walmart fuel station to fill up the car. I had a couple of left over Walmart gift cards so I used them to fill up and still had $1.08 left over. Not bad and glad to get rid of one of the cards.
Next stop was to get something to eat the choice was Pelancho's Mexican Restaurant. 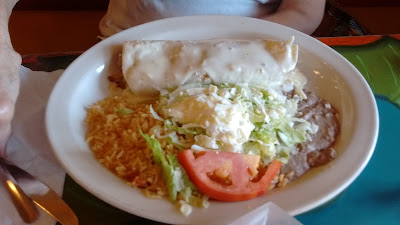 Nancy had the Chicken Burrito with rice, refried beans and salad. 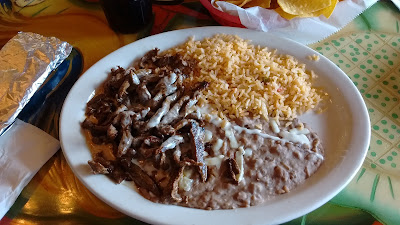 I had steak with cheese poured over top of it refried beans and rice that tasted so good. But was a little much for me that I had some left over to bring home.
Ok next stop was at the Save A Lot where Nancy said she wanted to get cabbage that was on sale for 39 cents a pound.
Next stop was to AutoZone for a switch to replace the one that went bad for the pump in the motorhome.
Then it was back to Walmart to get some groceries and Nancy had a few other things she needed.
After a couple of hours in Walmart it was for our last stop which was Kroger's for some ice cream that we like in the that is $1.00 a pint with the Kroger card.
Nancy likes the Orange Sherbet and I like the Jammed ice cream with the Butter Finger candy in it.
It was 7:30pm by the time we got back home unloaded the clean clothes, groceries and putting all of it away.  I tell you both of us were pretty well wore out.