Wednesday is usually Jackie's shopping with her daughter Chris. They wanted to know if we would like to meet for dinner in Morehead.  We said sure that it would be nice and Nancy had a few things she needed to get also. When we got to Morehead Nancy called Jackie to see where they wanted to meet and have dinner, Jackie said they decided on Cracker Barrel. 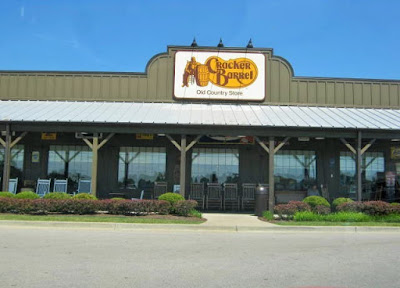 So Cracker Barrel it was. We had a nice meal and Jackie said she would pick up the tab. Thank you so much Jackie.  The best part was just being able to just sit with Chris and Jackie talking and enjoying the time together.  After getting thru we told Jackie that we needed to do some shopping also and that we would take her back home with us so Chris would not have to make the trip of taking her and then coming all the way back to Morehead. So that worked out real well for all of us. 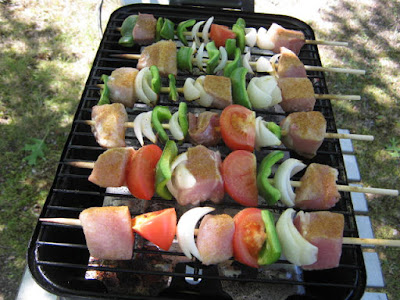 Yesterday looking in the freezer I saw a pack of boneless pork ribs so I told Nancy I would I would cut them  up and make us some kabobs.  She called Jackie and told her that we would do the supper.
This was the first time that I had try grilling kabobs so I told them it might turn out good. But in the end with Nancy fixing some sides to go with the kabobs it tasted pretty good. I may try it again at some point down the road.
Nancy and I watched the last night of the RNC up until the end then we were ready for bed.
Thanks for stopping by and have a great day.