After getting up and getting ready yesterday I went into the Walmart store to buy a few things we needed while Nancy was getting ready.
We were in no hurry to get on the road because we were only going 14 miles to Cain's Creekside Campground.  I didn't want to get there to early to check in.  We stay at this campground for a few days going and coming because it is close to where our grandson Jeremy lives.
After checking into the campground I unhooked the car and pulled into our site. When I attempted to level the motorhome nothing happened. I turned on the switch for the pump and no sound of the pump running.  So then I tried the slideout which runs on the same hydraulic pump to see if it would work. I heard the sound of the pump as the slideout starting moving. So that eliminated the pump being the problem. From there it was to see if the problem was 12 volts to the switch. Checking with the volt meter there was current to the switch. 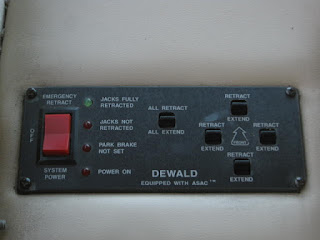 Next was taking the panel with the on/off switch and the four leveling switches out of the dash.
Looking at the circuit board I didn't see any burnt places so next was the switch which looked and functioned good. I did blow the dust out of everything with a can of air which always comes in handy. Upon closer inspection I saw the on/off switch a plunger type instead of the contact ones.
Thinking that the plunger might be the problem I pressed down the switch and let it go so it would snap up thinking it might free it up. After connecting the wiring back to the circuit board and what do you know it was working again.
After all that it was time to go over to Jeremy's for dinner that he had for us and watching the first game of the Final four Tournament.  After the first game we game back home where I watched the next game and then it was bedtime because I was very tired.