After leaving Douglas Lake and filling the motorhome up at Kroger's it was a little after 1:30 pm. We stopped in Newport to fix a sandwich to eat. Look close at the pic above have you seen a Krystal like this one. It is in a fifth wheel and is a drive up where the girls where carhops. the one is getting a drink out of a cooler.  They are remodeling the present Krystal and I guess they didn't want to lose any business.
Yesterday we drove more that I wanted to but I had a hard time finding the Linville Falls Campground that is off of the Blue Ridge Parkway. I was talking to the lady in the park office and telling her about being a campground hard to fine she said you used your gps didn't you I told her yes. She told me where I ended up going on the other side of the mountain and I said yes again. She said those reading  for some reason will read the same in the campground. 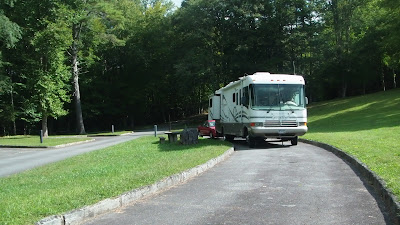 Well anyway even though we got there and set up by then it was dark when I went up and put the money in the box. I found a pull through site and that was good because we were moving on the next morning. This is a campground with no hookups but does have water and a dump. That was ok I got to try out my solar system which worked out good. We have led lights that hardly uses any amps from the battery. I can watched tv for 3 1/2 hours at night and still have enough power to make coffee with the electric drip coffee maker. The 325 solar on the roof and a 2000 amp pure sine wave inverter pulling power from two Walmart 27 batteries is doing good.