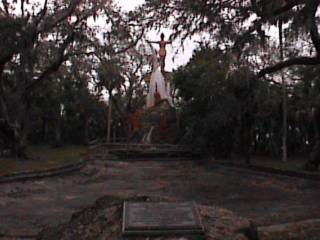 This is the sculture of Oleeta slaying Tomokie
The Lengend of Tomokie
The indians regarded a certain spring with venerable superstition,for its waters were known to possess curative powers.
They believed a messenger from the "Great Spirit" was sent every evening at dusk to drink of this "Water of Life".so called by the Indians, The dew falling into the spring from the wings of this messenger gave the waters their curative and restoring qualities.
Tomokie,gaint chief of his warriors,did not share in this belief. He greatly offended Indians of other tribes by drinking out of the spring. At last he seized the curious wrought sacred cup,never before touched by human hands. This act broughton the war of his band against the other tribes. Tomokie led his warriors into battle. Every bow and arrow of the combined enemy tribes seemed aimed at him. However,he was unharmed. Suddenly, Oleeta,a beautiful enemy maiden,was seen to spring forward,drawing her bow at the great Tomokie. The discarged arrow pierced his heart. Oleeta rushed forward,snatched the cup from the dead Tomokie's hand, only to be struck herself by a poisoned arrow,causing her to fall dead,clasping the sacred relic. This terribly enraged her tribe,who with their allies,did not desist until every member of Tomokie's band was dead. Oleeta's body was buried with stately ceremony near the spring. The sacred cup is said to be in the possession of Florida Indians at the present time.
.