Sunday we left Stony Fork Campground to get on I-81 and head North once again.

I found out again why I like to stay off the interstate highways and drive the two lane roads.  The highway was so crowded with trucks and cars in such a hurry but at one point we slowed down to 20 mph for six miles while the highway patrol cars lead us through a construction zone. 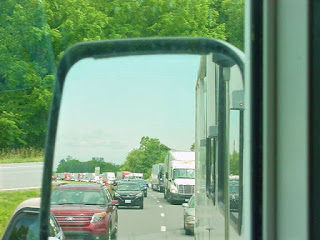 This is what was behind us and just as many before us. 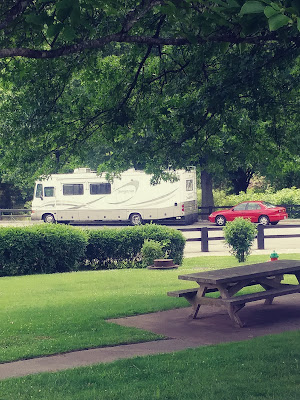 The first rest area was so crowded that the cars and trucks where backed out on the interstate.
So I had to go pasted that one and pull in the second one that had room and it felt good to get out and walk a little. 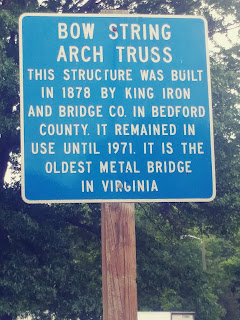 At times there might be a little history lesson at a rest area.
I drove all the way to Waynesboro, because I was wanting a early star getting on the Skyline Drive where I could take my time and enjoy at a slow pace.
We had a nice quite free place to stop for the night.
Yesterday morning we woke up and had an early start of the day. 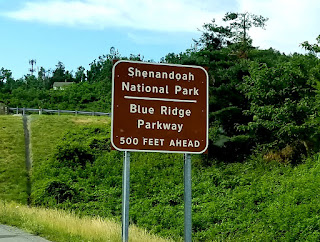 road to inter the Shenandoah National Park and unto the Skyline Drive. 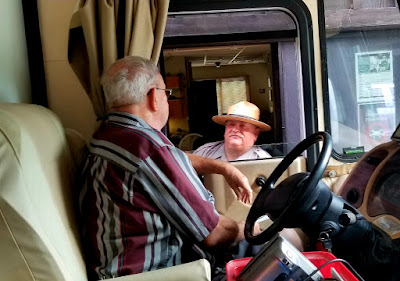 Soon we were at the ranger booth with Ranger Ken and after showing him my Golden Age Passport and driver license for ID we were all set to enter.
But not so fast my friends, I had to talk with the ranger a bit before leaving.  I asked about if the bears were plentiful this year and he told me we should see many bears because the count on them were up this year. 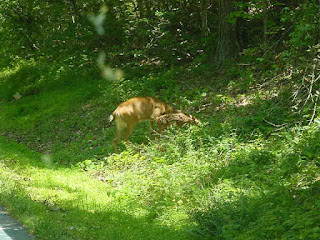 A short distance into the park we saw the Doe with her two Yearlings. 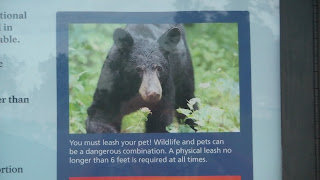 Our first pullout and reading the information stand that was there.

Skyline Drive is 105 miles long with 95 pull outs along the way. 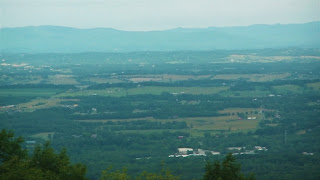 We could only get a fair view because it was hazy yesterday.

Nancy and I did take time to pose for Sherry.

We got a camp site at the Loft Mountain Campground.  This is  camping spot only but they have a dump station with water and a shower house that you have to pay to take a shower.

We had a nice cool night to sleep here on the mountain top with the window open above our heads.