The good and not so good

The good news, after much searching I found a place that could take the generator out of the motorhome to do the needed repair on it. 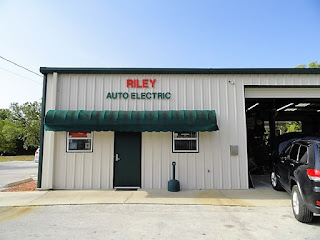 The place is Riley Auto & Electric which is in Homosassa just north of us.
The only thing is they said to have it there by 8:00 in the morning this past Thursday.
I know how Nancy doesn't like to get up early plus Sherry is the same way I told them we could go up Wednesday evening and stay at the Walmart overnight and that would give them a little more sleep time.
Besides that would also see how the residential refrigerator would do with the solar and batteries.
But first back to the generator. 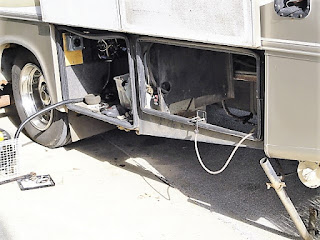 After removing the generator in a very short time. 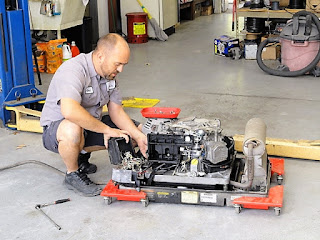 The guy took it apart and just as I thought it was the field coil that was the reason the # 2 plug was not firing.  Don the owner had ordered the field coil when I called a few days earlier so they would have it back together and running in a short time.
Now the not so good news, the generator did not start up.
Up on checking the electric motor part of it would not turn.  My first thought was oh no the stator is shot and that it is expensive.  But on checking further it needs a new belt, the rubber couple that connects to the fly wheel was broke and there is a small oil leak that has to be repaired.
The parts will have to be ordered and I could get it Tuesday or Wednesday.  I told Ron that I would just wait until Thursday to get the generator since we would be leaving on that day and he said that would be fine.
Now, about the test of the residential refrigerator that is supplied by the 2000w pure sine wave invertor.
The news is very good, we were able to do what we had been doing with the rv refrigerator and could not tell any difference.
This was for only one day and a night so any longer might be another story.  But with all the testing that I have gone through already, I think this was a good choice in replacing the refrigerator.
So with an rv refrigerator costing in the neighborhood of $1200.00-$1400.00 and the residential costing $333.00 delivered, plus setting it in place and they took away the old refrigerator.
The addition of one 100w solar panel was a good choice indeed.
Thanks for stopping by and have a great day.

It will be nice to get your generator up and running again, especially with the residential fridge if you are dry camping with not sun for a few days.
Hope all works out good for you.

Glad you are getting things ready for your next road trip and adventure.
Be Safe and Enjoy!