Friday was a busy day again with a project that I have been putting off for sometime.
Our car (Little Red) which is a 2004 red cavalier has had an air conditioner problem for way too long so I thought I would look into the problem a little closer.  I knew the problem was the actuator door by the sound it was making a clicking sound.
So I went to google to see what needed to be done and the suggestions on you tube.  Also the cost if I would take it in to a service place which said the cost would be $600 to $800 because of the difficulty of the labor involved. On you tube they showed how the dashboard would have to be removed in order to get to the actuator.  After checking things out I decided I could do it myself by getting at it from beneath the dash and in order to do that I would remove the front passenger seat so I would be more comfortable lying on my back.

After taking the actuator off I was off to Advance Auto to get a new one.
From there I went to hills to get a few groceries then I picked us up a pizza from Little Caesar's.

After getting back home Nancy ask if I was going to eat and I told her I would rather wait until I was finish with the car than eat the pizza and have to lay on my back to finish up with the car because at times pizza doesn't agree with me anyway.
Checking my time with the car including taking the seat out and putting it back in took all of 45 minutes.
Not to shabby in the it saved me at least $600. 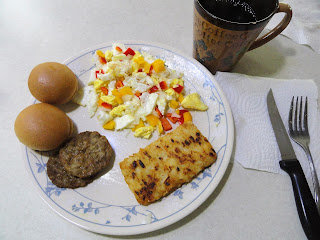 Saturday started off good with Nancy fixing me a good breakfast as always on Saturday.
Two eggs with peppers and onions, two sausage patties, two small slider biscuits, a fried hash brown patty that with a cup of coffee tasted mighty good.

Well it was another trip to Walmart because although the actuator door was working the air coming out of the dash vents were not cooling enough so I had to buy a can of freon to put in.
Back hone I added the freon and after a short time checking the temperature it measured 47 degrees so good enough with the car setting still and idling.

With being caught up for the day I settled into my lazy boy and watched a couple of college football games the rest of the day.

It is nice being able to do any kind of repair for yourself which really helps the pocketbook.
Also nice to see you are keeping busy and getting around.
The Oil Companies always enjoy raising the prices for any reason.
Be Safe and Enjoy!