Yesterday morning when we got up it was 59* it was cool but at that temperature it made for good sleeping for the night with the window open over our head.
I got out of bed first as usual and had my second cup of coffee while checking my email and a few blogs.  By that time Nancy was ready to start her day by getting up.
We had our breakfast then begin to start our day.
It got hot quick for the day with the temperature getting up to 90* but I wanted to change the oil in the car which I did while taking a couple of rest periods drinking some water.
Later we decided to got into Eatonton so we could get a few groceries but first we had better eat since neither of us had lunch. 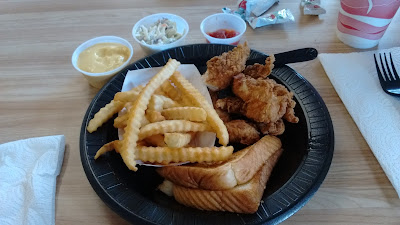 I drove through town and we thought we would try Tastee Chick Restaurant.  Upon entering the restaurant it looked like the place had started as a drive in and through the years had become a walk in restaurant.  This is one you place your order at the counter then find where you wanted to set down and they bring the food to you.  Nancy and I both had the chicken tenders with fries, cole slaw and Texas toast which was good.
After that it was to Walmart to do our shopping that took a couple of hours.
Getting home and putting the groceries away we then had some cookies and coffee sitting for a while to settled down we both took a nape.
Later on we turned the television on to watch the presidential debate.  With the end of that came the end of our day.