After disconnecting the water, sewer and electric then letting in the slides, taking up the leveling jacks we were pulling out of Cain's Creekside RV Park.
I got on I-75 something I don't do very often but sometimes you need to.  The weather was nice and sunny but the big trucks that I don't like are still there to remind me why I like the two lane roads best. 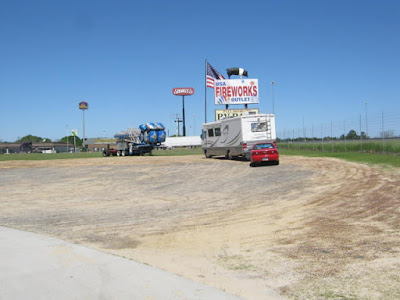 Half way to our destination I took an exit and pulled into a vacant lot. 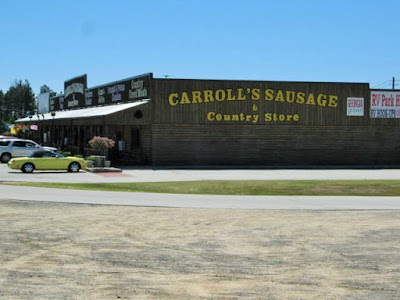 It was across the road from Carroll's Sausage & Country Store. This is a place I've been wanting to stop at and go in to look around for a few years so yesterday was a good time. 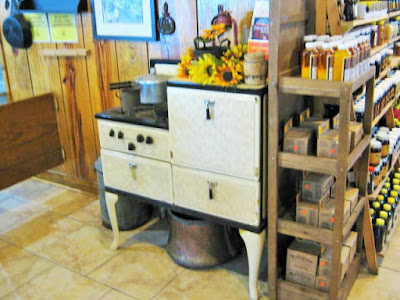 There was an old gas stove that was for the old feeling of the store. 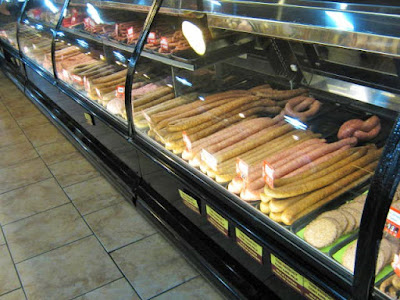 Then as we turned a corner in the store, I saw the longest and most sausage I have seen. There was big sausage small sausage hot ones and ones of different flavors. Not only sausage but steaks, ground meat, pork chops. The meat was sliced from thin to thick or anyway you wanted it. If you bought six pounds or more they take 20% off the price. Can't take it with you? They will ship it where ever you want it. 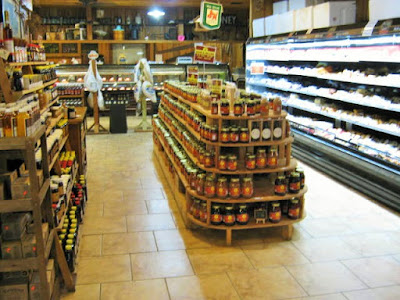 But wait, there's more as the tv commercial goes. There is jams, jelly, hot sauce, mild sauce and something that I don't think I would like, that was the blueberry catsup.
After buying some meat we were on our way again.
After an hour or so we arrived at my brother Nick's house. When he saw me he came out to help me unhook the car, park the motorhome and set up.
We went in did some catching up on things then he and Joan had a delicious meal of spiral cut ham, green beans, mashed potatoes, corn and hot rolls. After the meal we watched tv, talked, then it was time for a slice of strawberry cake and coffee, ummm that was good.
We came back out to the motorhome early since we still had to let out the slides and set up things for the time we are here.
A very good day indeed.

Tell everybody I said hey!!