Sherry and the gulf

Yesterday Nancy had an appointment with her hair dresser for a hair cut and this time she wanted her to color her hair.  Usually Nancy does this herself but it has getting harder for her to stand that and the pain she has to do it.
Sherry and I took Nancy to get her hair taken care of and we went to Walmart to return a pedometer for myself that didn't work right out of the package. The funny thing about it was when I was looking at the pedometers a man and his wife said "those won't work" they said they bought a blue one and a black one the black one didn't work. I thought well it will not make any difference of the color they are the same inside. Sure enough I got Nancy and Sherry the blue one and me the black one. One out of the three did not work guess which one did not come on, you guessed it the black one.  I'm hard headed so Nancy tells me and got another black one that is in working condition.
Sherry and I had a little time so I drove her out to see the gulf waters so she could take some photos. A guy was out fishing on this cool day. I forgot to mention we are still having night time temperatures  middle 40's. 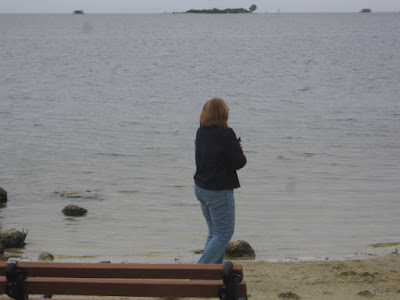 Here is Sherry taking in the scene of the gulf waters. 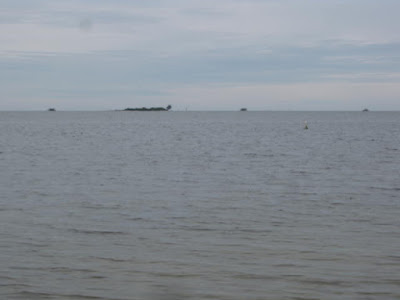 Here is a shot of three stilt houses and an island. These houses out in the gulf were built years ago, they don't let them built new one out in the gulf. 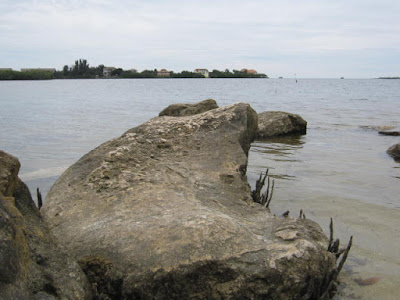 It was a cool and overcast day so the photos did not come out the best.  Sherry was very satisfied that she got to see the gulf.  She lives in West Virginia which has beautiful mountains but the gulf is a treat.
Thanks for stopping by and have a great day.