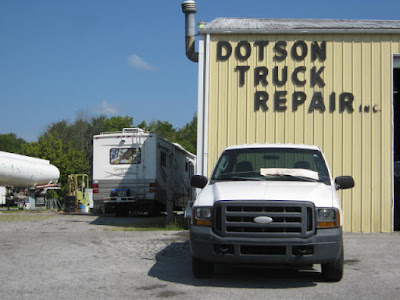 Monday Nancy and I were up way earlier than we wanted to be but I wanted to get the motorhome down to the truck repair shop so they could get started on it. After getting to Dotson Truck Repair we had to wait 15 or 20 minutes for them to finish up another repair they were doing. 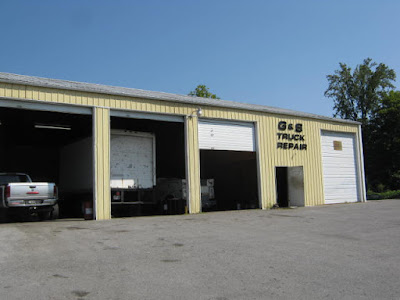 The shop is also known by the new name G & S Truck Repair. 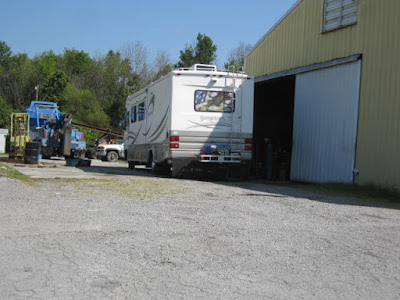 It was time for our repair where they had me pull up to the shady side of the building. It was a good spot for them where as it was in the shade most of the day. 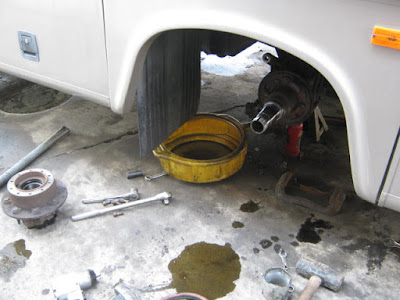 After the guy working on it the rotor was wore out and needed a new one the caliper was fine so that was good news. Granville the owner loaded up the rotor and worn disc pads and said he would be back later with the news of how long it would be getting the repair done. It would depend on how long it would take to get the new parts. Middlesboro is a good size town but I didn't think they would have a new brake rotor anywhere in town. When Granville got back he said "good news" he found everything to get the repair finished that day. That was good news I thought for sure it would be two or three days. 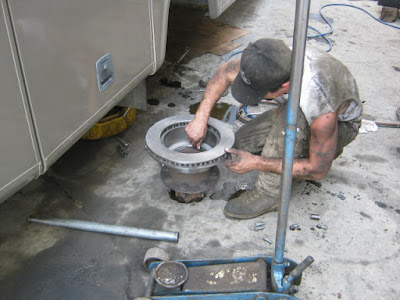 Here's the guy bolting on the new rotor. They really had a time with the old one as when it was assembled new Ford Motor used Locktite on the bolts. 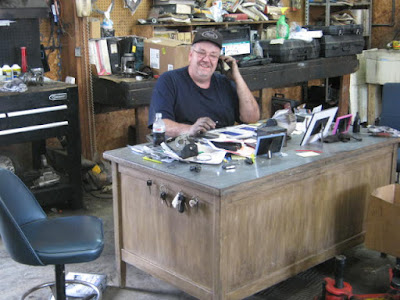 Here is Granville the man himself.  A heck of a nice guy. He did a very good repair and more that a reasonable price when it was all added up. I was expecting to pay more I even asked him if he added it up correctly I highly recommend G & S Truck Repair if you need a repair while in or near Middlesboro, Kentucky.  With the repair over with we where on our way south around 4:30 pm.
We drove to Morristown, Tennessee and spent the night at a Walmart.
Yesterday we arrived at Panther Creek State park where we will be until Friday before moving on to Clabough's Campgound in Pigeon Forge for our annual family reunion.