Friday was the day to do the laundry again. We found a Laundromat just a few miles from the campground which was nice. 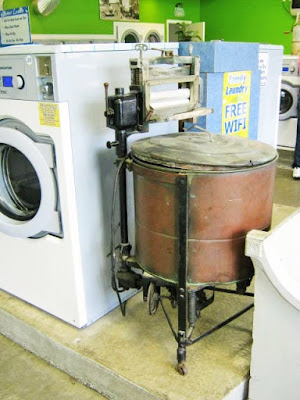 No Nancy didn't use that washing machine although she could have since she had used a washing machine somewhat like that one in her younger years. The Laundromat was new with new machines so that was good. Some of the Laundromats that we have visited have old machines that sounds like a whole marching drum corp.
After doing the laundry it was time to eat so we chose the Golden Corral and the senior early bird special for around $7.50 which included the drinks. We've been holding back on eating at Golden Corral since the last time we ate at one the food wasn't that good.  Tis time it was a good choice because the food was really good and they have added the all day breakfast bar which made the day for Nancy, I hope all of them are better with the food like this one.
Yesterday Nancy had to have her hair cut so it was out to the Great Clips for the hair cut. Since we were out we took a little ride to see what was in the area and it was time to eat so we stopped in at a new Steak & Shake. While we were eating Nancy was count the people they had working at this location which was eighteen employees. Oh the food was good and so was the price of $10.27 with our senior discount no bad at all for two meals.
Today is out last day here tomorrow we will move on down the road.

Thanks for stopping by and have a good day.

Heck I remember helping my mother with her old wringer washer.
Golden Corrals can be bad for the waistline if you get carried away.
Be Safe and Enjoy!