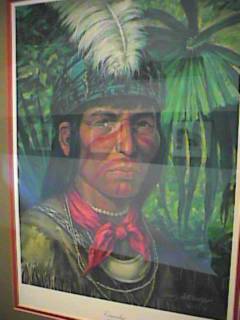 In the museum was a lot about the indians which inhabited this part of Florida. This is a painting of Coacoochee,who was possibly the greatest of Seminole warriors. It was Coacoochee who developed numerous guerilla attacks against the increasing US Army. His dramatic escape from Fort Marion is legend. It was this dynamic individual who provided the impetus that carried the war another five years after the capture of Oceola. When it became apparent that further resistance was futile,Coacoochee agreed to persuade somw of the remaining warriors to surrender,and with them he was shipped to the west in 1841.
.